3.0 Asteroid belt, metallic meteorites and multiple impacts (Fig. 3a, b)

Every day hundreds of thousands of meteors burn up in the Earth’s atmosphere, most millimetres in size (Parkes 2018). About every 100 years, one that is metres in diameter almost reaches the ground resulting in serious local damage such as that in Russia in 1947 (Struve 1950). Apollo objects, asteroids or comets whose orbits pass through the Asteroid Belt, average 1 km in diameter. They reach Earth about once in every 250,000 years leaving a 20 km diameter crater (Wetherill 1979). About every 100 million years a meteorite of more than ten kilometres in size will cause worldwide damage that could cause mass extinction. The Vredefort Meteorite cluster of planetary core material that impacted earth should be a once in Earth’s lifetime event (Marcus, Melosh & Collins 2018) and should theoretically only have occurred during planetary formation 4500-4000 Ma (Elkins-Tanton 2016).

Planetary formation started some four and a half billion years ago. Not, as has long been accepted, a gentle accumulation of dust and gasses, but a far more violent formation, with planetoids forming and then crashing together. These planetoids have even been shown to have generated enough internal heat to melt and form metallic cores as the denser materials sink to the centre. Gradually fewer and larger planetoids form, crash together and reform until one is left large enough to survive and sweep the orbit clear, absorbing the debris. This then becomes the planet (Fig 3a) (Elkins-Tanton 2016). 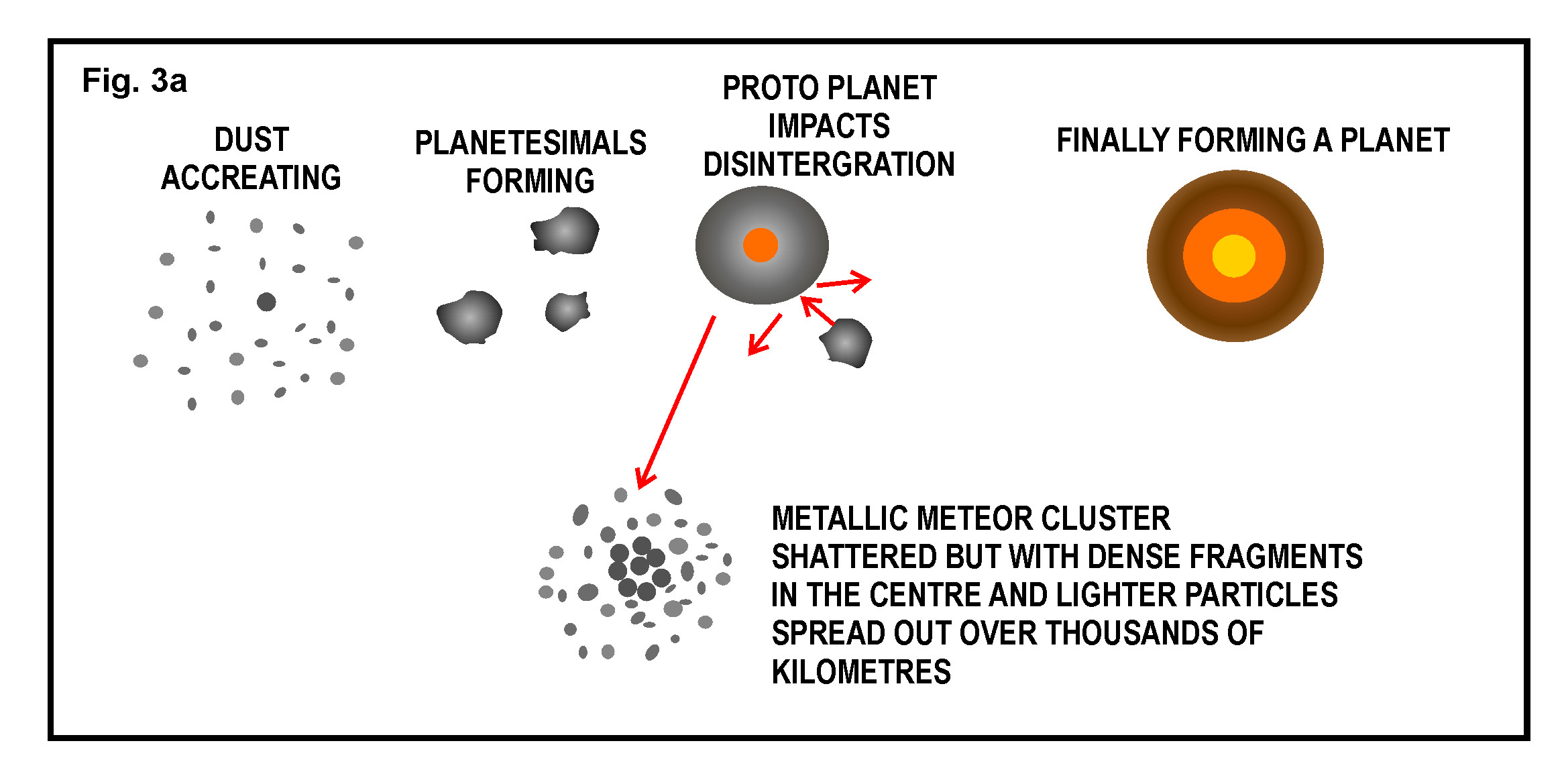 Planetary formation in the solar system was successful except for that unstable area between Mars and Jupiter where today there are more than 400,000 objects of more than one kilometre in diameter (Wetherill 1979). This is the Asteroid Belt which is left with a relatively small amount of material, the remnants of planetesimals or the remains of one or more successful planets that were later smashed to smaller particles. About 85% of the remains are chondrites, stony objects (Wetherill 1979), but some are rich in minerals which would have originated from a core. An example of this is the 226 km diameter nickel-iron asteroid known as Psyche which is expected to be visited by a NASA mission in 2021 (Elkins-Tanton 2016, Schroeder 2018).

The relationship between meteorites and minerals is well established. For example, it is always possible to find out which rocks come from meteorites by the abnormal amounts of metal in them, such as nickel. These high density metals would not be on the surface of the newly formed, still molten Earth. Rather they would sink through the melt and travel downwards to the centre of the planet. Once there they would not return to the surface as a dropped stone would not return to the surface of a pond. After the Earth cooled and a crust formed, metals found on or near the surface have come from space as the crust prevents them from sinking to the core. Deep volcanoes or mantle plumes only have trace amounts of minerals and are mainly made up of lava, molten rock, from the Earth’s mantle.

The high density metals are called siderophiles (iron lovers), as they like to join the high density iron at the core of a planet. For this reason an elevated concentration of siderophilic metals in melt rock is a good indication of meteorite activity (Alvarez & Asaro 1990). Most of the metallic elements in and around the Vredefort Structure, Bushveld Complex and the Great Dyke, including gold, chrome, platinum, PGMs, cobalt, manganese, vanadium, nickel and iron, are siderophilic.

I propose that the cluster of metal-rich meteorites which left a legacy of the world’s greatest deposits of minerals could only have come from remnant core material of some long-ago shattered planet, the remains of which are now likely to form the Asteroid Belt. (Struve 1950).

It now appears that many of these asteroids are not alone on their long journeys through space. Besides the multiple Shoemaker-Levy-9 Comet impact with Jupiter in 1994, and the twin craters at Clearwater Lakes in Canada (Alvarez & Asaro 1990), geophysicists John Spray, Simon Kelley and David Rowley have discovered that five known craters stretching from Canada and the USA to France and Ukraine all have exactly the same age of 214 Ma. Three of the five craters, Manicouagan and Saint Martin in Canada and Rochechouart in France were at the same latitude, 22.8 degrees north, now forming a nearly 5000 km chain. The other two, Obolon in Ukraine and Red Wing in Minnesota lay on identical declination paths with Rochechouart and Saint Martin. This was not obvious at first but when the continental positions of North America and Europe joined together, with the position of Pangaea taken into consideration and the rotation of the Earth at that time, then it all fitted. The three main meteorite craters lined up exactly west to east and the distance between them was short enough to allow for impacts in a short space of time, within hours (Spray, Kelley & Rowley 1998, Steele 1998), or even minutes.

I hypothesise that the Vredefort Structure, Bushveld Complex and the Great Dyke are also the same age, created within minutes, of each other and of the Manicouagan cluster.

Between 300 Ma and 200 Ma, southern Africa was lying on its side, rotated clockwise relative to now (Hurley 1968, Veevers 2004, Moorbath 1977 & a series of graphics from the Senckenberg Museum). This positioning, combined with up to 23 degrees of obliquity (angle at which the celestial equator intercepts the ecliptic), would allow meteorites from other parts of the solar system to impact southern Africa from west to east (Fig. 3b).

At 214 Ma, Pangaea would have had North America and Eurasia joined together at the top of the continent. From west to east is exactly the same direction that the Manicouagan cluster impacted with northern Pangaea 214 Ma. In addition to this latitudinal alignment the continental maps of 300 Ma to 200 Ma indicate that Manicouagan/Rochechouart and Vredefort/Bushveld/Great Dyke were on approximately the same longitude north to south which would mean that they could all have been impacted by the same spread out cluster.

The perfect alignment for all these events in time and direction would be highly unlikely to have ever occurred before or after this period of 300 Ma to 200 Ma. 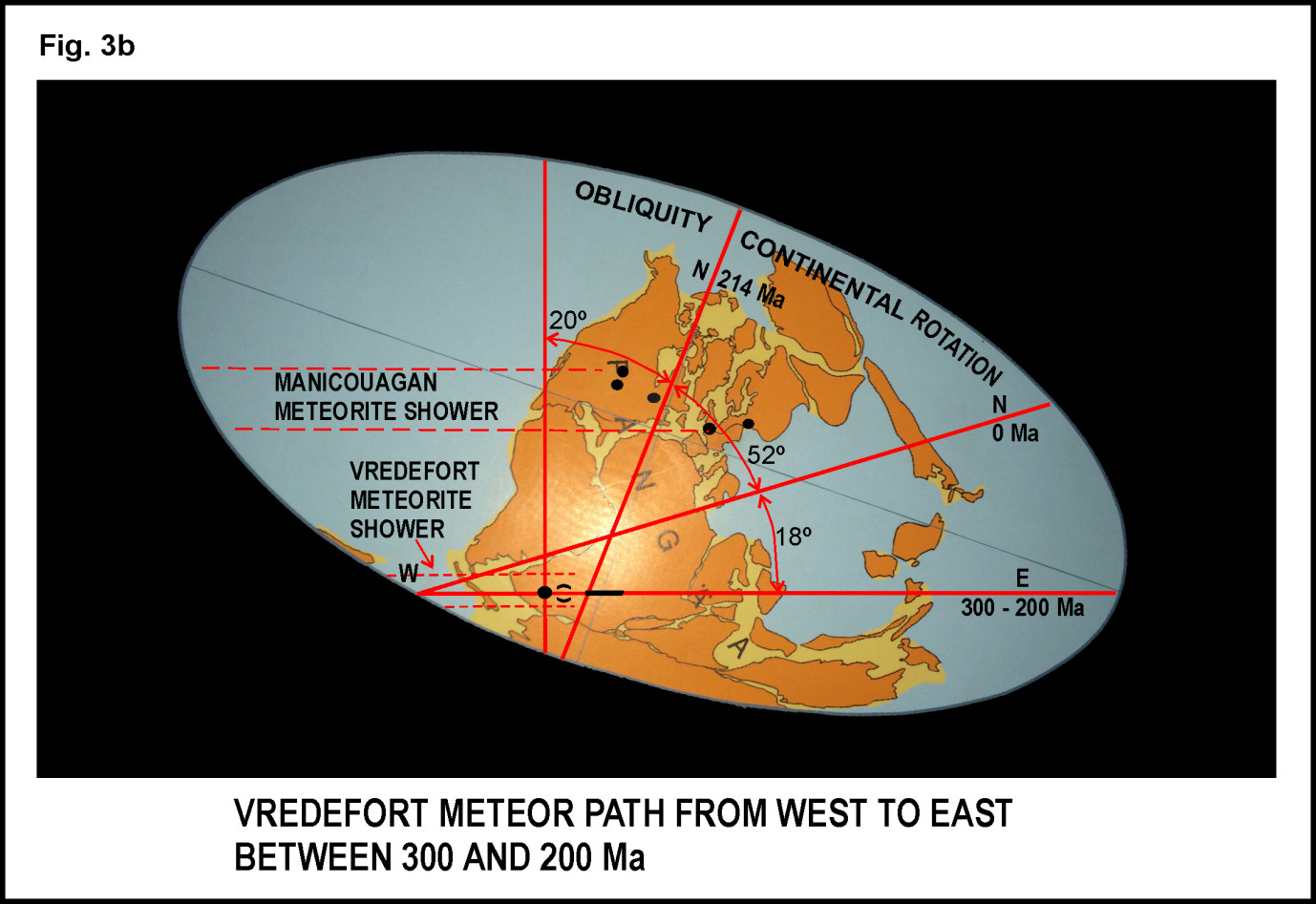 To get back to the unlikely proposition that three separate meteorites had collided with Vredefort 2020 Ma, Bushveld Complex 2055 Ma and the Great Dyke 2575 Ma then there would have been a 70% chance for each of them to have landed in the ocean, the remains never to be seen again, and very little chance that they would be metallic as 85% of meteorites are stony (Wetherill 1979). This means that of all meteorites that collide with Earth only 3.75% are terrestrial metallic impacts.

It is also unlikely that southern Africa would have been in a location and rotation on Earth to create three separate, once in a solar lifetime, events, perfectly aligned west to east as they were in 214 Ma with each other and the planetary plane (Fig. 3b).