If the meteorite is less than about one hundred metres across, it forms a simple crater when it collides with Earth. This impact makes a crater in the form of a bowl. The shock waves compress the target rock then the release wave melts, vaporises and blasts out ejecta; molten rock as well as debris from the meteorite itself. On Earth these craters can reach a maximum diameter of about 5 km and depth of about 1 km (Grieve 1990). The immediate or transient diameter of the crater is smaller than the final size as the steep walls slide into the cavity but the transient depth is greater as the final cavity is partially filled with debris and melt.

A well-known example of a large simple crater is the Meteor Crater (formally Barringer) in the Arizona desert in the USA. The iron meteorite was estimated to be about 60 metres in diameter, weighing a million tons and leaving a crater 1.2 km in diameter and 170 metres deep. The age of Meteor Crater is 25-50 ka and the meteor dissipated energy of about 5 mega ton TNT. 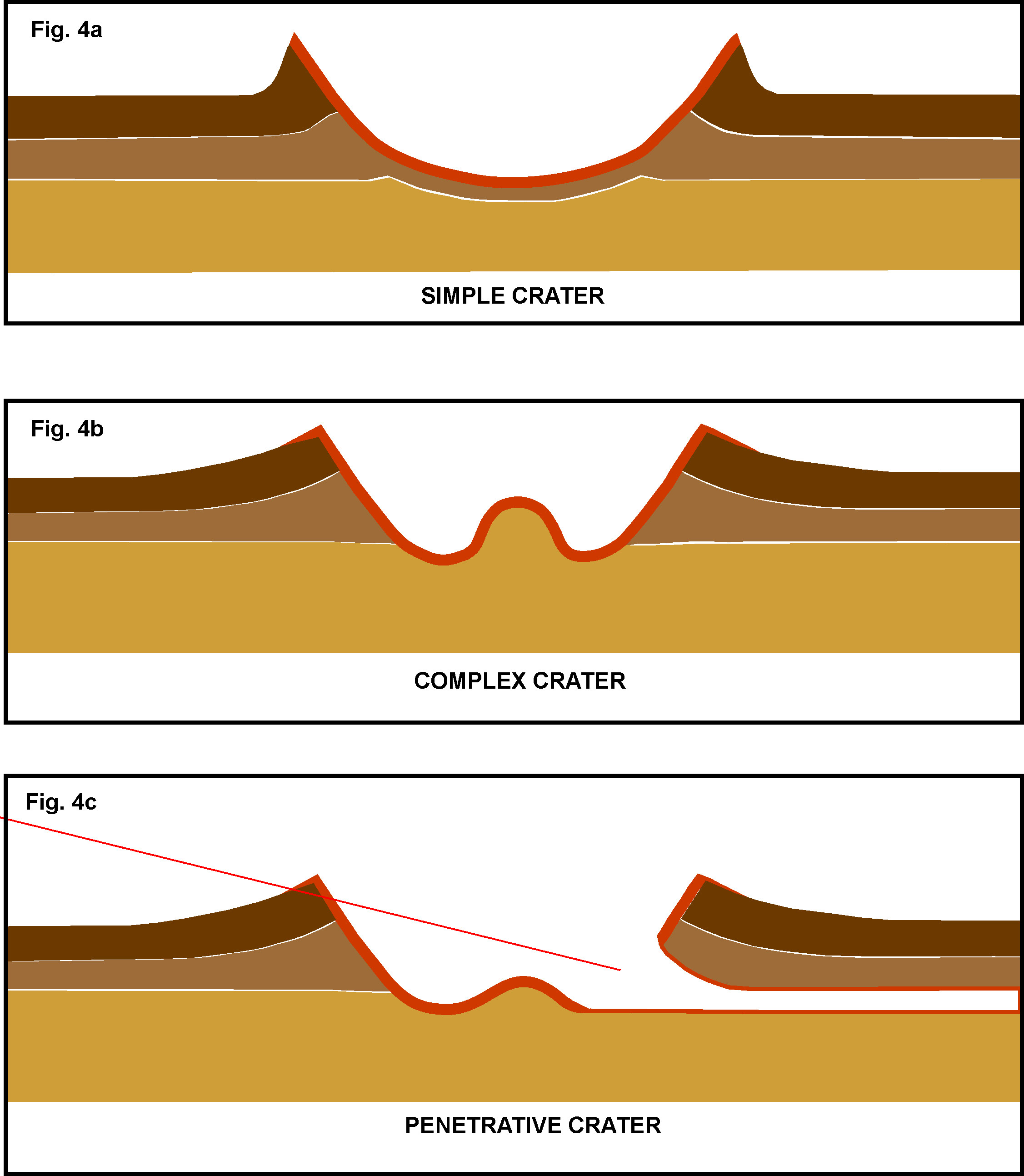 When meteorites are larger than about 100 metres in diameter and travelling in excess of 20 km/sec the impact compression followed by reflected rarefaction of the shock wave excavates a transient cavity, deep enough for gravity to help rebound the centre like a stone dropped in water (Grieve 1990). With large complex craters the transient depth is deep enough to penetrate the Earth’s brittle crust to an area in which plastic deformation takes place. The reflected rarefaction wave with hydraulic and gravitational effects can raise the central rebound core to great heights in seconds before it partially collapses.

After the ejecta is blasted out, the crater walls collapse and debris slides down into the newly formed jelly-bowl shaped crater. Examples of complex craters on Earth are Sudbury, Ontario, Canada, 250 km diameter, 1849 Ma and Manicouagan, Quebec, 75 km diameter, 214 Ma.

My hypothesis is that there is a third category that should be considered. This type of crater would result from a meteorite impacting Earth at a shallow angle. If we look at the cross-section of Meteor Crater, it is seen that the meteorite impacted at an angle estimated to be about 30 degrees. One side has a higher rim and from borings made here this is found to have a deep pocket of shattered rock (Beals 1958). This profile is similar to that which we have from the Vredefort Structure with the rim 1.2 km below ground level where an asteroid plunged into the earth from the current south-west (Dietz 1961) seventy kilometers south of Welkom and a 300 metre high rim in the current north-east, Johannesburg (Fig. 1b).

Now we need to consider how it is possible for a meteorite, or fragments thereof, to penetrate 599 km below ground. The signs are that they travelled underground through the sedimentary strata from south of Welkom to beyond Polokwane and 550 km across Zimbabwe.

Firstly, they need to be metallic. Chondrites, stony meteorites, would disintegrate close to the impact zone. As the Bushveld Complex has contained nearly 6 billion tonnes of chrome, as well as all the iron and other minerals (Vorster 2001), this would make an excellent projectile. It also makes no difference that the 6 billion tonnes of chrome would become molten at some point in its journey as it has been shown that most projectiles become fluid above 3 km/second but continue to penetrate in a hydrodynamic manner (Charters 1960).

Secondly, there needs to be sufficient energy to drive this projectile for hundreds of kilometres through old, sedimentary rock. This would require mass and speed. Einstein came up with Energy is Mass times Speed squared. Think about an anti-tank projectile, roughly 700 mm x 25 mm, weighing about 6 kg. This is travelling at about 1500 m/second which can penetrate 700 mm hardened steel armour (M829A3 2016), about 28 times its diameter.

Our Vredefort projectile cluster has a mass 1000 billion times more and a speed 16 times higher. This makes the energy 256,000 billion times greater! This is certainly sufficient to drive the projectiles through the sedimentary strata for 599 kilometres. Note also that the ratio of diameter to penetration is similar, by taking the equivalent diameter of 28 km then the penetration is about 20 times its diameter. Probably more as the target material is sedimentary rock and not hardened steel. It is important to note that the distance travelled below ground for the Vredefort-Bushveld event is similar to the Great Dyke.

Examples of penetrative meteorite craters are the Vredefort Structure, 284 km diameter which is complex and penetrates a total distance of 599 km, and the Great Dyke in Zimbabwe, 550 km long, which is purely penetrative.