The Bushveld Large Igneous Province (LIP) begins about 200 km north-east of the Vredefort Dome and is the largest layered igneous intrusion in the world. This comprises massive crustal emplacements of intrusive rock with high levels of magnesium and iron (Coffin & Eldholm 1994) which solidified without erupting through the Earth’s surface. It is more than 60,000 square kilometers in size and is estimated to contain over one million cubic kilometers of intruded rock. There are two crescent-shaped ‘brackets’ of dark, mineral-rich mafic rock, to the west and east, which lie on either side of the current north-east trending line from the centre of the Vredefort Structure to the Great Dyke in Zimbabwe.

Geologists suggested that during the Bushveld event the old craton was extended and then compressed in a south-west to north-east direction (Gibson & Stevens 1998). This would correspond to a meteoritic projectile penetrating through this area, one tongue shaped extension continued before coming to a squiggly stop past Potgietersrus Platinum Mine north-west of Polokwane.

The Bushveld Complex is not the result of a direct meteorite strike from above as no signs of shock-metamorphic effects associated with this type of event have been found. No shatter cones, no planer deformation features (PDFs) in quartz or zircon, no impact melt and no melt-rich fragmented breccia. There is also no deformation of the floor strata below the Rooiberg Group that would be associated with a direct impact (French 1990). 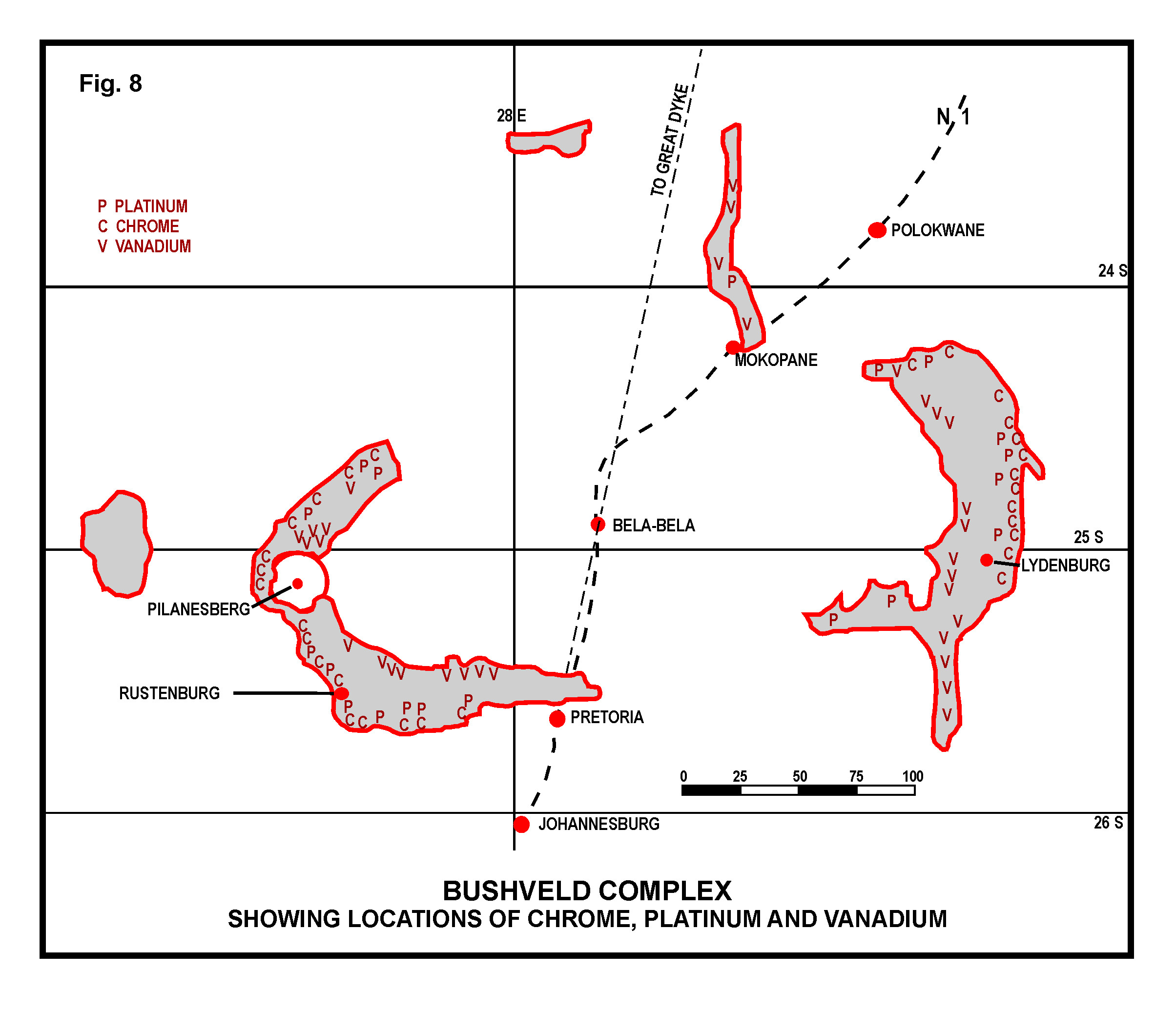 It has been suggested that the source of minerals in the Bushveld Complex could be plume related following a large meteorite impact (Rhodes 1975). This is unlikely as mantle materials do not contain large concentrated amounts of siderophilic minerals (Alvarez & Asaro, 1990) such as six billion tonnes of chromite plus large quantities of iron, manganese and other minerals. It is more likely that the large volume of high temperature magma which arrived after the minerals, accumulated in the centre of the ring-shaped complex, splitting it. This could convert the dark, mafic rock into lighter coloured felsic (Tackley 2017). This later intrusion, which could also have come many millions of years later directly from the Karoo Mantle Plume as felsic magma, would split the initial ring shape, spreading the Complex apart into its present form.

My hypothesis here is that as the mineral-rich Bushveld Complex is not volcanic (Kinnaird 2005) or the result of direct meteorite impacts (Reimold & Koeberl 2014) and it was intruded horizontally (Kinnaird 2005), we need to look at a side penetration of a hydrodynamic nature. The intrusion would have come from molten particles of the Vredefort Meteorite. The initial multi-kilometre sized meteorite fragments, containing about 6 billion tonnes of chrome (Vorster 2001) and other minerals travelling at 25 km/second before impact, slowed down progressively over a few minutes.

In this time, even though these projectiles became fluid, they forced their way, hydrodynamically, one behind the other at hypervelocity, not less than 3 km/second, in enormous, pulses of hydraulic shock (Charters 1960). They parted the layers of horizontal strata for hundreds of kilometres, creating waves of mountain ridges, before coming to a stop. These would have been at a lower energy level by the time they reached the Bushveld Complex and would have resulted in the absence of meteorite impact indications (French 1990, Reimold & Koeberl 2014) but still allowed hot magma high in chrome, iron, magnetite and other minerals to intrude.

As this horizontal intrusion slowed down under the middle of the Bushveld Complex, most of the mineral-rich molten magma would begin to spread out pushing into existing 2054 Ma layers within the Pretoria Group, raising younger layers and the Rooiberg strata above that. The high density, high pressure fluid would lift layers from the bottom and intrude to about 75 kilometres out from this central point. As each layer was filling so another layer of sedimentary rock above would part and the next intrusion would begin. As the intrusion was relatively thin, heat could be dissipated in the enveloping layers of strata causing it to cool quickly and end abruptly. The formation of pigeonite, Impala Black Marble, at about 900 degrees Celsius confirms that the magma had cooled quickly during the side intrusion process.

Regarding the age of the Bushveld complex it is said that in spite of being about 2055 Ma it is undeformed (Kinnaird 2005). In other words, it does not look its’ age.

When the geoscientists wanted to get this date, they determined the age of rocks in layers of strata pre and post-dating the intrusions of the Bushveld Complex. This indicated a date of 2054 Ma (Scoates & Friedman 2008). Minerals cannot be dated so they dated the rocks below and above the Merensky Reef at 2054 Ma.

If, however the Merensky Reef was intruded from the side horizontally at a depth that matched a layer of 2054 million year old existing rocks in the Pretoria Group strata then Scoates & Friedman and all the others were measuring the age of the local rock in the layers of the strata that existed before the meteorite strike. There is no reason that the minerals in the Merensky and other reefs could not have been intruded there 214 Ma or any time from 2054 Ma until now. It is simply by chance that the physical depth of the horizontal Bushveld Complex intrusions matches the age of the existing strata at that depth (see Table 3).

There is another point to make in the measurement of age for the Bushveld Complex. By dating the layers of strata to infer the age of the intrusion, various dates have been calculated depending on the site locality. Hence we see in two articles on the Bushveld Complex (Walraven & Martini 1994 and Kinnaird 2005) a spread of ages listed of up to +48 million years. This is not possible for an event that took place in a short period of geological time (Harmer & Armstrong, 2000) and ‘a time span of a few million years’ (Kinnaird 2005).

I contend that 214 million years ago, large semi-continuous pulses of mineral-rich chrome core material from Vredefort Meteorite particles, travelling hundreds of kilometres a few kilometres below the surface, came to rest in the Pretoria Group (of the Transvaal Supergroup) at a depth that corresponded to an age of 2054 Ma. Incorrectly the layer of strata is being dated and not the projectile that penetrated the strata from the side.