6.0 The ripples of upturned strata, magma dykes and caves (Fig. 6)

6.1 The ripples of upturned strata

The chrome and other minerals in the meteorite fragments did not disintegrate on impact or in the explosion under the Vredefort area. Because of their size, metallic content and the shallow angle, they penetrated parallel to the Earth’s surface and travelled hundreds of kilometres underground towards the north-east in minutes. These hypervelocity penetrations would have converted some of their immense kinetic energy into heat, melting themselves and the target sedimentary rocks in seconds as pressure was converted to heat. The metal-rich fluid then ploughed on through the sub-surface creating wide waves of uplifted old strata, hundreds of metres high, in the form of ripples, alternating with west-east dykes of newly erupted doleritic magma (molten rock) as they went (Fig.6).

Eventually the molten projectiles lost energy, slowing down to hydraulically intrude horizontally between layers of sedimentary rock to form the basis of the Bushveld Large Igneous Province. Some of the molten mineral fragments continued past the Bushveld Complex to come to a squiggly stop north-west of Pietersburg. However, the ripples did not stop there as the tsunami-like shock waves and magma below the hard crust radiated outwards to the north thrusting up more mountain ranges as they went.

The first ripple is the north-eastern outer rim of the meteorite crater. This is the Witwatersrand Ridge, stretching 56 km from Krugersdorp in the west through Johannesburg (Northcliff) to Bedfordview in the east with sedimentary slabs, jagged on edge, facing north and sloping steeply back. The additional 100 km wide ripples that spread outwards through the crust to the north left us with the south facing Magaliesberg, Waterberg, Strydpoortberge, Soutpansberg and Lebombo mountain ranges. The distance from Vredefort to the Witwatersrand Ridge is roughly 120 km, then 65km to Magaliesberg, 105 km to Waterberg, 120 km to Strydpoortberg, 175 km to Soutpansberg and 350 km to Lebombo Mountains.

Midway from Johannesburg to Pretoria, between the Witwatersrand and Magaliesberg ranges is a twenty kilometre wide west-east seam of hard, blue, igneous, dolerite rock which is mined in huge quarries at Diepsloot and Midrand for crusher stone to make concrete or surface roads.

Beyond Pretoria, on the N1 you can turn west on the N4 route along the valley floor north of the Magaliesberg Range. Here you will follow a 100 km long string of pyramid shaped hills stretching all the way past Rustenburg. These pointed hills contain the sought after Pyramid Gabbronorite; a dark-coloured inverted pigeonite bearing gabbronorite. This is commonly known as Impala black marble. The Reserve Bank building in Pretoria is clad with this product.

In the village of Pyramid on the R101 route you can see a hundred metre high cross-section in a rock quarry showing slabs of sedimentary rock that were lifted up by the magma. 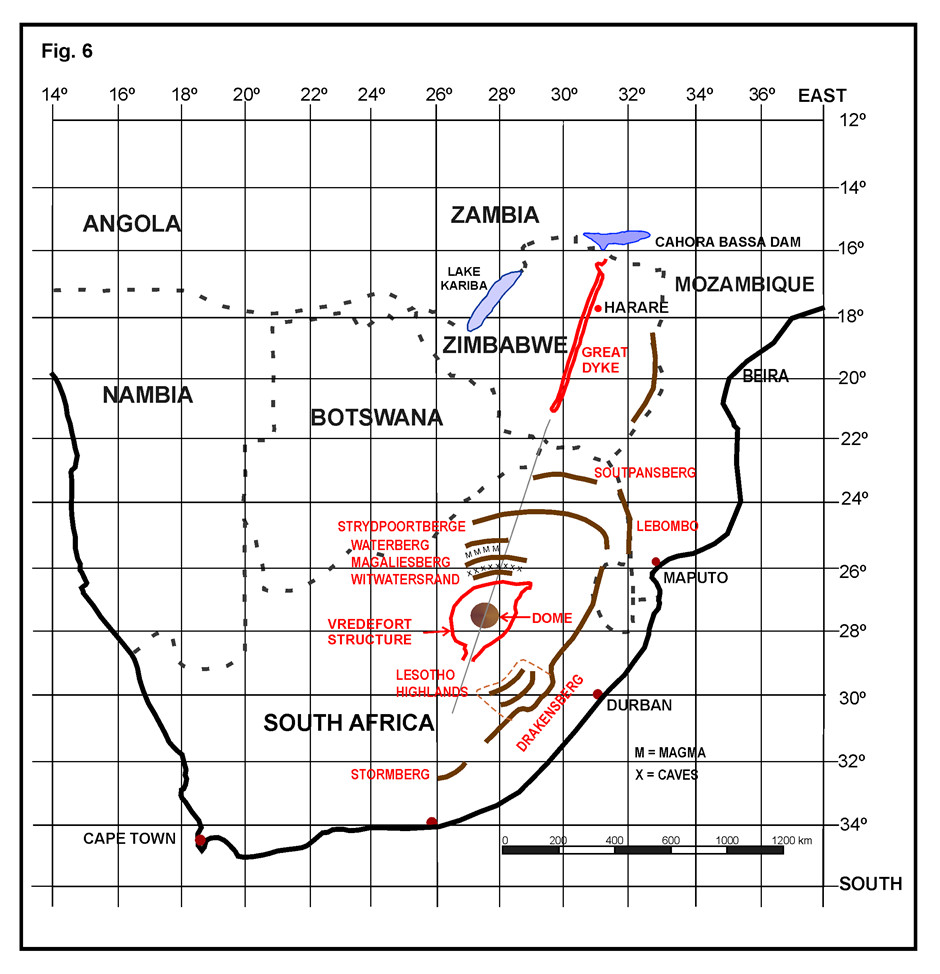 The shock wave from the meteorite impact radiated outward, compressing the underground sedimentary strata. This was followed by a rebound that can tear rock apart to form massive cave systems. Signs of these remain in long valleys alongside the Witwatersrand Ridge, most of them now flooded. This aquifer stretches from the town of Springs, east of Johannesburg to Botswana in the west. The water stored is about the same as contained in Lake Kariba (Turton 2012), an amount of 181 cubic kilometres (World Bank 2018).

Until 1938 when the Vaal Dam was built, Rand Water pumped its utility supply for Johannesburg out of this aquifer at Zuurbekom, near Lenasia. Mines to the west of Johannesburg could only sink shafts after the development of cementation in 1925 to get through these flooded caves and others have had to pump hundreds of thousands of tons of a cement-minedump-sand mix into the caves to control flooding.

To the west, sinkholes are a huge problem, even swallowing an entire mine reduction plant in 1962 at West Driefontein with the loss of 29 lives and a house with the entire Oosthuizen family at Blyvooruitzig in 1964.

A team from the University of Johannesburg has now examined the recently discovered Armageddon Cave, 4 km long, 50 m wide and 260 m deep in the West Rand area, that has not flooded. Researcher, Pedro Boshoff says that the shock waves would have compressed the strata along the Witwatersrand and then suddenly released causing low angle slip faults with rock layers shearing past each other. He has made the connection with the Vredefort impact and therefore concludes that this giant cave is 2023 million years old which would make it the oldest cave on Earth by far (Tucker 2015). The previous oldest is the Jenolan Caves in the Blue Mountains to the west of Sydney, Australia, which is dated at 340 Ma (Armstrong and Osborne 2007).

The problem with Armageddon being dated at 2023 Ma is that the area where all these caves occur was below 4 km of ice during the period 302-288 Ma (Bangert 1999) when Gondwana was over the South Pole. If this did not collapse the caves, the following glaciers that scraped off the surface and left the Dwyka debris would have. This would mean that the caves have to be younger than 288 Ma. . If the Vredefort Meteorite struck the ground after the glaciers and the Ecca strata had been formed, then the age of 214 Ma makes more sense.