From 650 Ma to 500 Ma separate old continents on the Earth’s crust, floating over the heavier mantle, were moving together to eventually amalgamate by 320 Ma (Veevers 2004). This supercontinent, Pangaea, with northern America, Europe and Asia to the north and Gondwana (southern Pangaea) comprising southern Africa, South America, India, Australia and Antarctica in the south. The whole supercontinent of Pangaea floated southwards positioning Gondwana within the Antarctic Circle for fourteen million years from about 302 Ma to 288 Ma (Bangert, Stollhofen, Lorenz & Armstrong 1999). During this time snow and ice built up to 4 km thick (Horton, Poulsen & Pollard 2010; Montanez & Poulsen 2013).

As the lake silted up from rivers, fluvial, and windswept dust, aeolian, it eventually became a huge fertile swamp with dense forests of the famous Glossopteris trees. These proliferated from 298 Ma until 252 Ma (Prevec 2011). This was a water loving tree with tongue shaped leaves that grew to thirty metres high. For roughly fifty million years these swampy jungles laid down the organic debris that became the future Natal Vryheid coalfields in South Africa as well as those in India, South America and Eastern Australia. The protected Antarctic fields are buried under thick ice once again. In South Africa these deposits became the Pietermaritzburg shale, and Vryheid Formations coal.

By 252 Ma the giant lake with its swampy jungle had silted and become dryer as Gondwana drifted northwards towards hotter climates and all the vast forests of Glossopteris died out. Intermittent floods and windborne dust buried the Natal coal under kilometres of sediments, the Ecca Group. This situation had stabilized by 214 Ma (Table 2). 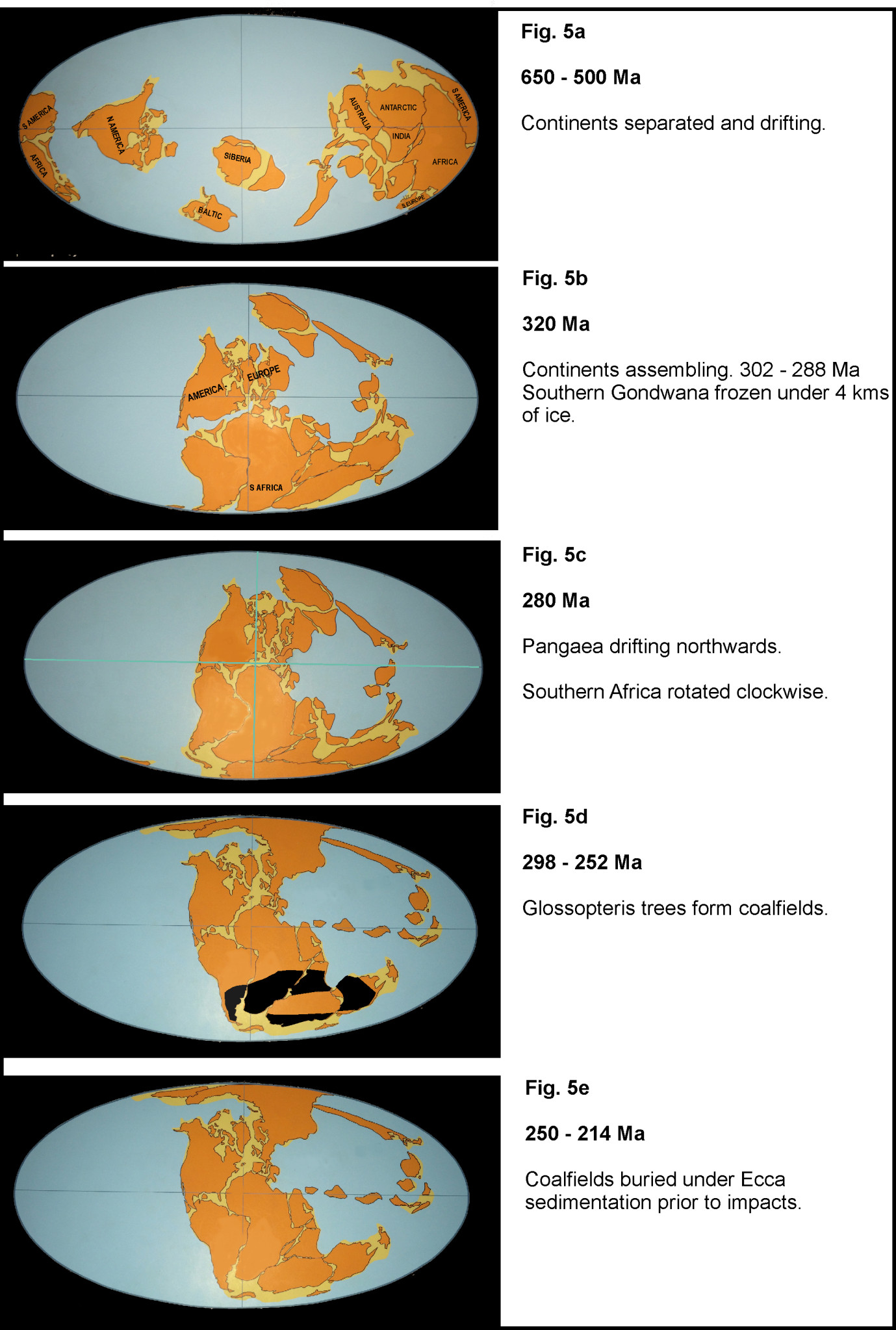 It was at 214 Ma that large parts of the platinum-rich chrome core fragments of the Vredefort meteorite created the cavity into which the sedimentary Ecca and Transvaal Group strata tilted and slumped.

We know that the glaciation event took place about 288 Ma in which 4 km thick ice would have scraped off the centre cone and outer rims of the Vredefort Structure including the ‘ripples’ if they had been there. This would also prove that the Vredefort impact took place after glaciation about 214 Ma and not 2020/2054 Ma.