Not only do we have Vredefort Meteorite Structure with its gold lining, the Bushveld Complex and Great Dyke in an exact line with chrome, platinum, PGMs, gold, nickel, vanadium and asbestos, but there are large mineral deposits from 1000 km to the south-west and 1000 km to the north-east of the Vredefort Structure. This 800 km wide swathe of world leading economically viable minerals stretches from O’Okiep Copper District in the Northern Cape to the Copperbelt in Zambia.


Table 4 The Swathe of Minerals of southern Africa

This vast array of minerals, many of which form the largest deposits in the world, could not have seeped up through the Earth’s crust from the mantle as they have a higher density. Most of them are siderophiles that would have sunk to the Earth’s core if they had been there during the formation of this planet. After the crust was formed they could only have come from meteorites.

These were all minerals that would typically have been separated out with a density and temperature in the molten core of some long past planetary formation. After cooling down over hundreds of millions of years and solidifying, with different materials in neat layers, like the segments of an onion, a serious smashup occurred throwing off the mantle and leaving the shattered core to be held together by its own reduced gravity. It is likely that this fragmented core had mostly separated into the various minerals of similar densities before colliding with Earth as most of the minerals are accumulated in individual deposits with the densest in the centre of the swathe (Fig. 10b).

As the shattered core approached Pangaea from the west in 214 Ma, at a very shallow angle, the dense individual fragments of gold, platinum, and PGMs as well as a large amount of chrome gathered in the core surrounded by iron and manganese, then copper and lastly rocky remnants of the mantle spread out over tens of thousands of kilometres (Fig. 10b).

Looking at the swathe of mineral deposits, the bottom of the outer core, rich in copper, collided with Earth first in the O’Okiep Copper Region of the Western Cape, followed by mountain sized chunks of iron and manganese in the 160 km long ore body that includes Sishen and Hotazel (Boardman 1977). Note the recently discovered subsurface Morokweng Crater, possibly the world’s second largest, 80 km north-east of these deposits (Fig.10a)

The centre of the core containing the dense minerals, chrome, vanadium, gold and platinum, then impacted into the ground from south of Welkom, below Vredefort and under Johannesburg/Pretoria to the Bushveld Complex. Most of the high density gold, vapourising first due to its lower melting point and the long horizontal distance through the atmosphere, remained behind in the cavity before being ejected and then precipitating to line the strata that slumped into the crater.

Past the Vredefort Structure the order of impact was reversed with iron and manganese impacting in a semi-circle from Thabazimbi to Swaziland and copper to the east at Phalaborwa and north from Musina on the Zimbabwe border to the Copperbelt in Zambia. The largest deposits of copper occur here, exporting about one million tonnes per year (Fig. 10c, d). Close by over the border in the Democratic Republic of Congo (DRC) 58%, 64,000t/a, of the worlds cobalt is mined and exported.

It is also possible that the West Australian gold and iron were deposited by fragments from the same event as Australia would have been closely located for this impact at that period of time.

The approaching, shattered, planetary core was not a single compact object but would have been spread out whilst travelling through space. The fragments would collide with one another; bounce off for thousands of kilometres, then, the gravity from the heaviest, most densely packed core particles would draw them back again. This spreading out would be exacerbated by gravity when approaching a large object, like Planet Earth.

Some of the far outlying core impacted with the compact northern parts of Pangaea with what are now Canada, North America, France and Ukraine as the Manicouagan cluster of meteorites 214 Ma. The direction of approach and longitude matched the Vredefort-Bushveld-Great Dyke cluster as close as can be estimated for that period (Fig.3b). 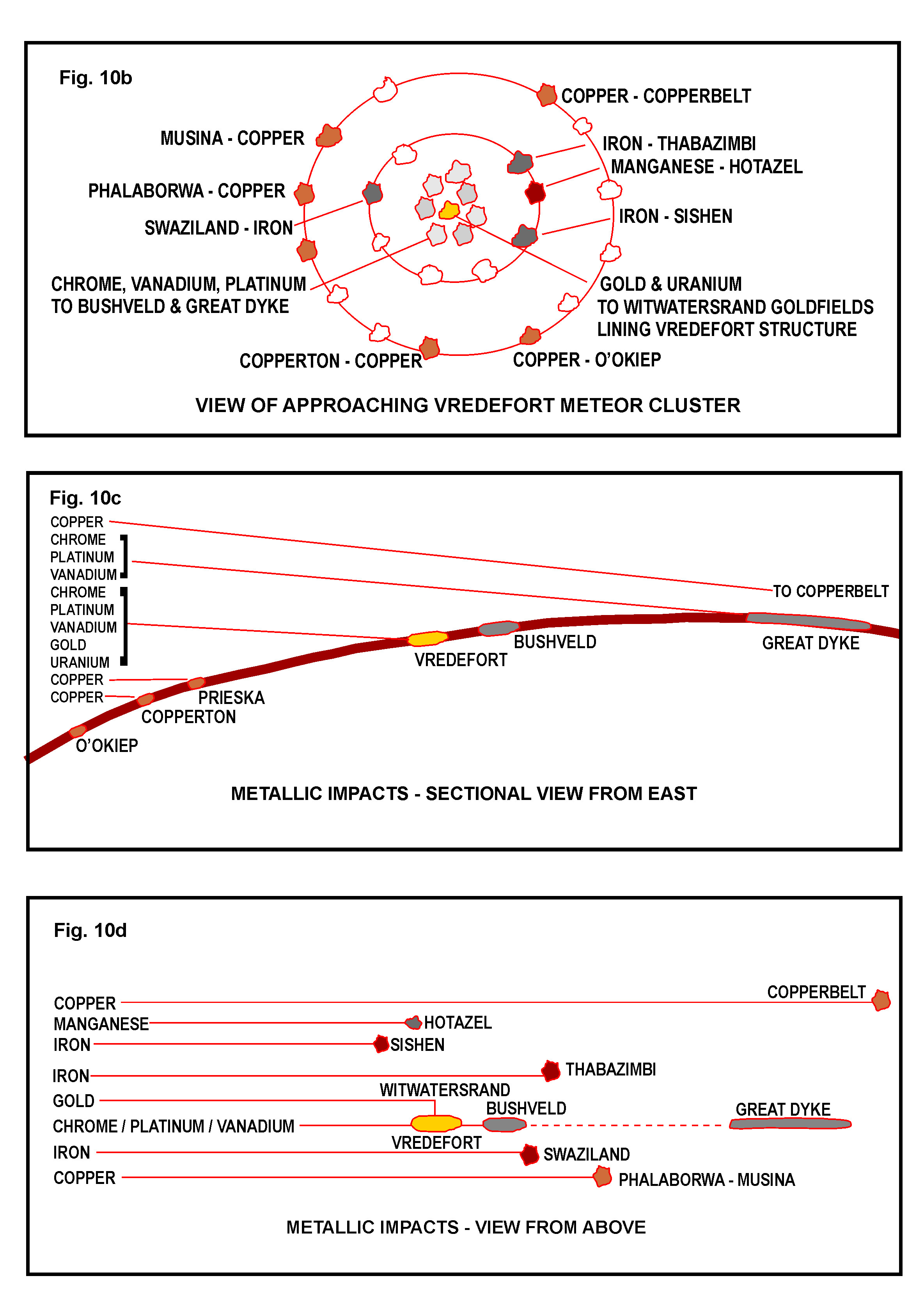